Steaks are one of the most popular meals when it comes to BBQ. And why wouldn’t they? – These pieces of meat are very juicy, delicious, and rather simple to make. Moreover, there are many options to choose from.

And some of the most popular types of steak in the world are Picancha and Ribeye. Both of them are made of beef, taste amazing, and become quite a controversial topic among many BBQ enthusiasts. People wonder and debate which steak is better – Picanha vs Ribeye. Are they similar, and it makes no difference what to make? Or are there still differences between Ribeye vs Picancha?

That is what we decided to take some time and research to figure out and share our findings with you!

Picanha steak is also known as the Top Sirloin Cap. And as for what cut of meat is Picanha – it comes from the rear portion of the cow. While this cut was mostly popular in Brazil, with time it has made its way to North America and other parts of the world. And ever since then people fell in love with this amazing steak. That is because this is the cut from the part of a muscle that is not very used by cows, and this is what gives Picanha such a soft taste.

As the name suggests, the Ribeye steak, aka Scotch Fillet, comes from the rib of the cow. This cut is usually very tender and has some intramuscular fats, that when grilled, make the meat a lot juicier.

Evaluation of Picanha and Ribeye

So now that we’ve familiarised ourselves with these meat cuts, let’s now take a closer look at what the Picanha vs. Ribeye offer:

The first major difference between Picanha vs. Ribeye is their appearance and texture. Picanha meat is a lot more tender and has better structure but fewer fats. Meanwhile, Ribeye has more intramuscular fat content, which will make the meat a lot tastier and rich in flavor.And while both of these are beef, which is very beneficial for your health and is one of the best meats to smoke, it’s still best not to go too heavy on Ribeye due to higher fats content.

Before cooking the steak, it is extremely important to keep a few things in mind.

First of all, you must allow the steak to defrost evenly. Thus, make sure you rest the steak on a flat surface for about an hour before you start cooking it. You can also marinate your meat slightly in this stage.

So even if the Top Sirloin Cap vs Ribeye has their differences both have the same defrosting processes.

How to cook Picanha vs Ribeye cuts is entirely up to you – some people like it extra spicy, while others enjoy a lot of garlic. The only important thing while cooking a steak is that the meat should be evenly cooked and allowed to rest.

Generally, most people believe that Ribeye tastes better than Picanha cut. This is because Scotch Fillet has more fat content that adds to the flavor of the meat. The intramuscular fats melt and make the steak tender and juicy. On the other hand, Top Sirloin Caps are less tender due to less fat content.

Other than that, Scotch Fillet tastes the best when fried on a skillet with butter, garlic, and rosemary. Meanwhile, Top Sirloin Cap is the best when grilled instead of fried. Plus, you can add some butter and pepper to enhance the taste of Picanha meat.

Top Sirloin vs Ribeye steaks have different protein and fat content. Usually, meat that is rich in protein has less fat content and vice versa. Therefore, if you are looking to eat more protein, try out the Top Sirloin Cap cut instead of the Scotch Fillet. Ribeye is rich in fat and does not have a substantial amount of protein content, so it’s best if you want some cheat meal, so to speak.

Comparison Between Ribeye and Picanha

Now, let’s get to the major point of our Picanha vs Ribeye comparison, and see how similar and different these two meat cuts are.

Similarities Between Ribeye and Picanha

Both the eef Picanha and Scotch Fillet take quite some time to cook evenly. How much, of course, depends on how tender or tough you want your meet to be. Nevertheless, it is still important to allow both these cuts to cook for at least about 20 minutes.

Differences Between Ribeye and Picanha

As mentioned earlier, the Ribeye steak comes from the rib of the cow. And since the rib area has a lot of fatty tissues the Scotch Fillet steak consists of a lot of fat. Plus, it’s a lot tender and easier to cook.

Meanwhile, the Top Sirloin Cap comes from the top part of a sirloin cut. Sirloin consists of meat from the rear end, and therefore, the meat is a lot tougher and has less fat.

Another major difference between Picanha vs Ribeye cap is their cooking styles.

Ribeye is usually fried on a cast iron pan, and the most common Scotch Fillet recipes include flying the meat with garlic and butter. The natural fat from the cut makes the meat extremely tender and succulent.

Meanwhile, the Top Sirloin Cap steak tastes the best when grilled instead of fried. Though grilling does contribute to the flavor of the Picanha, it’s not uncommon for it to be a bit drier.

Thus, the Scotch Fillet is rich in taste and flavor and has a very appetizing aroma. On the other hand, the Top Sirloin Cap is sturdier and less flavourful.

All and all, both Picanha and Ribeye have their significant characteristics and features. Both of these are some of the most delicious steaks out there and make for some amazing beef roasts.

So, when you’re wondering which cut to choose, keep in mind the biggest difference between Picanha vs Ribeye – the fat content. Thus, it’s best not to go too heavy on the Ribeye, since it has a lot more fat content. And this is rather unhealthy regardless of whether you have some health issues or not. However, it would be a great cheat meal when you want to enjoy a fuller taste. And the Picanha is a healthier alternative, even if it might be less juicy than its competitor.

With that said, we sincerely hope that our little Picanha vs Ribeye comparison has helped you learn more about these amazing meals! So make sure to try these for yourself, and share with us which one you like more – we would love to know! 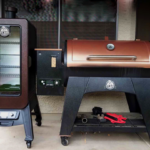 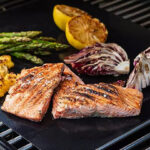 Choosing the Best Grill Mats in 2021